It's time to go thrashin'! From the sidewalk to your Game Boy Color comes the Razor scooter. You know the one -- compact, fun, and all the rage lately. Hop on your Razor and take a ride through one of seven environments including the suburbs, the schoolyard, the forest, and even a carnival while jumping off ramps, executing radical tricks, avoiding obstacles, and trying to beat your opponents to the finish line. 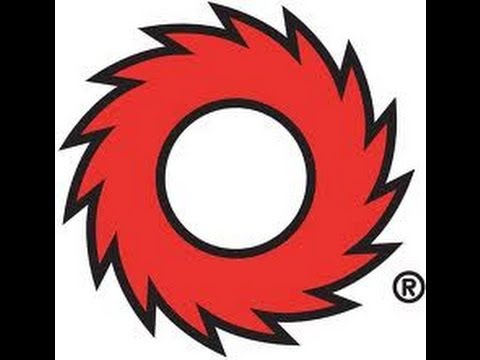 When I first plugged in the game, I was expecting sort of a go-anywhere type environment and was a little surprised to find that each level was linear and I couldn't turn around to pick up any items I missed. Once this initial 'shock'? (for lack of a better word) passed and I got used to the controls (which didn't take long at all) I found this to be a simple and somewhat entertaining game that reminded me a lot of Atari's classic arcade game Paper Boy.

There are four modes of gameplay: Championship, Racing, Trick mode, and Multiplayer. The Racing mode consists of a single race and gives you the option of selecting your environment or track and works well for learning how to get around. There are no points, just finish in first place to win. Trick mode moves through the seven environments in order, and gives you a set score to achieve to move on to the next environment. Points are received by pulling off tricks. Championship combines both the Racing and Trick modes. Points are received by a combination of what position you finish in and who did the most tricks. The problem here is that most of the points are based on the position you finish in rather than how many tricks you pull off. So in the end, the racing is more important than the freestyling if you want to win. Each gameplay mode also has a Novice and Expert setting, but I found almost no difference between these. In fact, the only visible difference I could see were the number of points required in the trick mode.

There is a fifth mode called Shop, but it's not really part of the gameplay. On each of the courses, there is money that can be picked up and after finishing that course, you can then spend that money in the shop. You can upgrade your shoes (acceleration), pads (recovery from crashes), forks (steering), and wheels (top speed). Each item will give you some kind of advantage, albeit a small one. Actually I didn't notice any difference with or without the upgraded items. There are two other items you can pick up on the course where you will notice a difference when they are used. They are the Turbo, which temporarily increases your top speed, and the Bonus, which temporarily doubles the point values of all tricks.

The controls are simple to learn and master and have a decent feel to them. You have your basic left/right and accelerate/brake controls, a jump button, and the trick button. The steering might throw you off a little until you get used to it. There are two modes of steering: Auto and Manual. Auto (which is the default) will automatically turn the scooter forward when you stop turning whereas you have to do it yourself in Manual mode. The trick button is used in conjunction with the D-pad to perform one of eight different maneuvers: No Footer, Back Flip, Tail Whip, Table Top, Decade Air, One Hand One Footer, 360, Superman. Each maneuver is worth between 100 and 250 points. You can also jump on walls, benches, pipes, etc. and grind down the edge. It doesn't seem to matter if you are going slow or fast or if you launch off a ramp or just jump on your own, you still seem to be able to jump high and long enough to do any of these without ever eating it or losing any speed. The tricks are very easy to pull off -- all you have to do is execute them anytime while in the air. This makes the game incredibly easy to master quickly since you can continuously perform the same trick over and over by holding the buttons down (yes, you don't even have to keep pressing them) and score a ton of points. 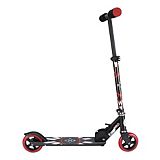 The graphics are pretty decent. The various obstacles and backgrounds have good detail and have good usage of color. The animation is nice when you're kicking forward or when you crash and fall off the scooter; the rest seemed a little choppy. I also noticed a few clipping problems when colliding with or scooting behind some objects.

The music is droning and bland. There are a few songs but only one in particular will play during the levels while the others are for menu or score screens. I wouldn't say the music is really annoying, but it doesn't add to the game either -- it's just there. The sound effects are a bit limited with sounds only occurring during menu selections, tricks, and crashing for the most part. The effects themselves are okay, but most likely you'll end up tuning out most of the sound anyway. Both music and/or sound effects can be turned off in the settings menu.

I found it was easy to beat everything this game has to offer in only a couple of hours, but it is kind of fun to go back and do some more tricks. The challenge and ease of control in this game also kept the frustration level to a minimum, which could appeal to the novice players out there but will bore the more advanced players. Razor Freestyle Scooter is a simple, fun game while it's new, but with its lack of challenge and little replay value (except maybe multiplayer) it will get boring quickly, which is why I give it a score of 72.